Nicki Lee and Kidz for a Cause in MidWeek!

Hey, let’s put on a show! That has been the rallying cry of many movie and stage musicals since Mickey Rooney and Judy Garland’s famous scene in the 1937 film Babes in Arms. Whenever there is a need to fund a cause or campaign, someone comes up with the idea of putting on a show and inviting the neighbors.

Fast forward to the 21st century, and the concept still works wonders. If you’re a kid impresario like 15-year-old Nicki Lee, it takes on a life of its own.

In 2008, she first exclaimed, “Let’s put on a show!” as a third-grader at Hanahauoli School, proposing a community service project.

“Instead of doing a beach cleanup or recycling, I wanted to do something that could utilize my love of performing,” says Lee, now a freshman at Punahou School.

“The first concert was at my house. My aunties, uncles and neighbors bought tickets, and the performers were just a few of my close friends, but we raised more than $1,100 for Ronald McDonald House Charities.”

Little did she know that her modest home-styled talent show would evolve into the full-on stage production and major charity event that it is today.

Kids say and do the darndest things! But it goes beyond a catchy phrase, as Lee and her supporting board and cast have found out.

The third Kidz For A Cause (K4AC) charity concert will be presented Sunday, March 15 at 2 p.m. at Hawaii Theatre. The historic 1,400-seat venue provides the setting for the largest youth talent showcase put on entirely by kids.

Every detail of the event is done by kids, ages 6 to 17, who are volunteers and want to help other kids.

“More than 100 kids from across Oahu come together to produce, choreograph, design, sell tickets, staff and perform at this event,” says Lee, daughter of Dr. Darrell and Cathy Lee of East Oahu.

“We know that one kid alone can’t do much. But all of us together, combining our energy, creativity and talent, make it happen,” says the articulate teen, who aspires to be a Broadway performer. “Anything is possible!”

“It’s a big goal, but K4AC is about letting kids do what we do best: dream big!” heralds Lee’s cousin and backstage director Megan Rodrigues, 14, ninth-grader at Iolani.

Family and parental help is never far away, of course.

In the case of Lee, her entrepreneurial and successful interior-designer mother, Cathy Lee of Cathy Lee Styles, has been a mentor to the K4AC group.

“The kids are inspired to do something bigger than they are,” she says. “The experience is akin to leadership boot camp, where management skills are nurtured. It’s empowering.” 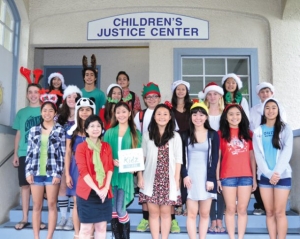 The K4AC board of directors brought Christmas presents to the Children’s Justice Center to put under the tree for the kids. They did this in lieu of secret Santa for each other. Front left is CJC state director Jasmine Mau-Mukai

Another parent who applauds the program is Dr. Mason Savage, father of K4AC logistics director Jacob Savage, 15, a ninth grader at Punahou. He observed how managing tasks unlocks latent potential.

“Jacob has a blast being in charge of welcoming guests and handling tickets,” Dr. Savage says. “An otherwise shy kid came out of his shell to rise to the challenge. We were both pleasantly surprised.”

A 33-member board and executive committee drive K4AC’s master plans and tasks. Lending youthful energy, community service spirit and hours of personal time to the effort, they claim the rewards of helping kids less fortunate than they are make it all worthwhile.

“On the night of the concert, you can definitely count on seeing T-shirts, necklaces, earrings and lots of other cool, handcrafted merchandise made by kids in our community,” Hata says, promoting the Kidz Store that will be online (kidzforacause. org) and at the theatre.

Audiences can expect a variety showcase featuring singers, dancers, bands, musicians and more from every corner of Oahu.

Sponsors and supporters don’t doubt that Lee and her motivated board, executive committee and student ambassadors will reach their goal. After all, kid power knows no bounds.

It’s a spirit we should all adopt.

So what if we’re faced with those mounting costs for rail, education, social services and other budget bugaboos. Perhaps we should take a lesson from young Nicki Lee and just exclaim: Let’s put on a show!

One of the KIDZ — Megan Rodrigues, 14, Iolani School

It’s Thursday at around 5 p.m., but it doesn’t really matter that I have school at 7:30 a.m. Grandma is calling us to dinner, but her words fall on deaf ears and full bellies. I still have to find crayons for my homework assignment due tomorrow, but I have bigger problems right now. As I turn and face (cousin) Nicki, the distant hum of music hanging in the air like an unspoken sentence, we both ask the same crucial question at the same time: Which Hannah Montana song do we perform for our parents, ‘Nobody’s Perfect’ or ‘Best of Both Worlds’?

Childhood led me to believe that anything was possible. There were no deadlines, no fear of judgment, no limitations on our infinite imaginations. When Nicki and I put on our mini shows for our family, we instinctively thought about charging money to see our performances. We were rock stars, at least in our own eyes.

Almost a decade later, nothing much has changed. I still cannot find my crayons and I still have school at 7:30 a.m. Every time I hear a Hannah Montana song play, I still feel the same amount of excitement as I did when I was 5, and our performances are still put on by kids. In other ways, however, everything has changed. These performances are now large-scale concerts. The money we raise is not the five dollars we charged our parents to watch us, but instead going toward helping others. This year, it’s Friends of the Children’s Justice Center.

Finally, the most important constant that has remained true since the beginning is that we are still kids for a cause.

Kidz For A Cause concert is Sunday, March 15, 2 p.m. and 6 p.m., at Hawaii Theatre. Tickets cost $20 and are available from any of the Kidz or at Hawaii Theatre box office and hawaiitheatre.com.

“Kidz” are encouraged to audition online before Feb. 23 at kidzforacause.org.